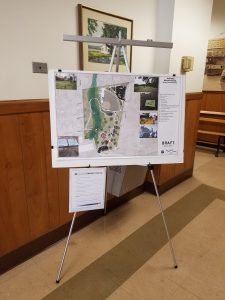 Planning is an important part of local government. Planning documents provide a roadmap for future development. As part of the planning process, Millersburg Borough has worked with the community, professional planning companies and the Pennsylvania Department of Conservation and Natural Resources to develop master plans for our six public parks.

The plans themselves are linked below as PDF documents. Please be aware that these are very large documents and could take some time to download, depending on your connection speed. Hard copies are also available for review at the Borough Office during normal business hours.

Once a particular project is included in a master plan, such as the Borough’s two plans, those projects gain preference during grant reviews. It is important to remember that projects contained in plans may or may not be completed based on funding and logistics. Additionally, a final project may not exactly resemble drawings rendered in the plans.

Planning without implantation is, of course, a waste of resources. Master Parks Plans are intended to be reviewed and revisited frequently. Some pieces of the Riverfront/MYO Park plan were implemented with the 2012 Gateway project which featured a new walking path and concession stand/restroom. Additionally, more upgrades are planned for MYO Park during the spring/summer of 2019. We looking forward to completing the items in the Square/Bradenbaugh/Seal plan in the coming years.